AKI Risk Associated With Radiocontrast May Be Overestimated 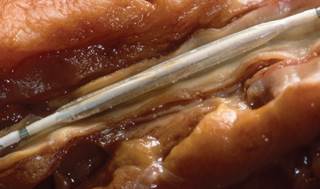 In a study, the odds of acute kidney injury were 7% lower among patients who received radiocontrast versus those who did not.

Clinicians may be overestimating the risk of nephropathy associated with radiocontrast administration, according to a study.

In a study that examined 5.9 million hospitalizations in the United States, Emilee Wilhelm-Leen, MD, and colleagues at Stanford University School of Medicine in Palo Alto, California, found that acute kidney injury (AKI) developed at a rate of 5.5% among patients who received radiocontrast and 5.6% among those who did not, a difference that was not statistically significant. After controlling for comorbidity and acuity of illness, the investigators found that radiocontrast administration was associated with 7% decreased odds of AKI.

“Taken together, these surprising results suggest that risk of AKI that can be reasonably attributed to radiocontrast … is likely to be much lower than frequently assumed,” the investigators wrote in a report published online ahead of print in the Journal of the American Society of Nephrology.

For the study, the researchers used the Nationwide Inpatient Sample dataset for 2009 to identify hospitalizations of patients older than 18 years who were in the hospital for 10 or fewer days. They stratified patients based on the presence or absence of 12 relatively common diagnoses associated with AKI.

In a press release issued by the American Society of Nephrology, co-author Glenn Chertow, MD, commented that “we would like for physicians, including cardiologists, radiologists, and surgeons who frequently are faced with decisions regarding the use of non-use of radiocontrast-enhanced imaging studies, to take this information into account in their clinical decision-making.”