Febuxostat May Preserve Renal Function in Some CKD Subgroups 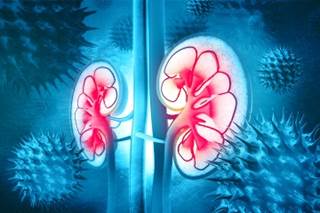 Study of patients with CKD stage 3 and asymptomatic hyperuricemia showed that febuoxostat ameliorated the annual decline in eGFR vs placebo in those without proteinuria.

Febuxostat, a xanthine oxidase inhibitor, may preserve renal function among certain subgroups of patients with chronic kidney disease (CKD) stage 3 and concomitant asymptomatic hyperuricemia, according to a new study.

Overall, the eGFR slope did not differ significantly between the febuxostat and placebo groups (0.23 vs ˗0.47), the investigators reported online ahead of print in the American Journal of Kidney Diseases. Subgroup analysis, however, demonstrated that febuxostat was associated with a significant suppression of eGFR decline compared with placebo among patients without proteinuria (1.69 vs ˗0.10) and those whose serum creatinine level was below the median (1.19 vs ˗0.57).

The febuxostat arm had a significantly lower incidence of gouty arthritis than the placebo arm (0.91% vs 5.86%).

In a discussion of study limitations, the authors pointed out that they used estimated rather than measured GFR. “Imprecision and biases inherent in eGFR are greater at higher GFRs, thus restricting the accuracy of classification in the mildly decreased GFR group,” they wrote. In addition, they excluded from their study patents with stage 4 or 5 CKD “because of clinical concerns about the rapid deterioration in kidney function in a short period.” Lastly, “findings from the study might not be generalizable outside of Japan because of the exclusively Japanese study population and the use of a Japan-specific eGFR equation.”