Post-PCI Acute Kidney Injury Not Linked to Contrast Use 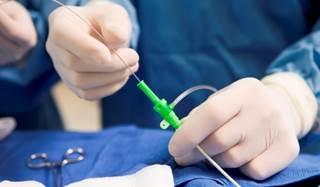 Myocardial infarction patients who underwent percutaneous coronary intervention had an AKI rate similar to those who did not have the procedure.

Development of acute kidney injury (AKI) following primary percutaneous coronary intervention (PCI) is not related to the use of contrast media, but rather to factors such as older age and hemodynamic instability, according to a new study.

The study included 2025 patients with ST-segment-elevation myocardial infarction (STEMI) who underwent primary PCI and received non-ionic, low-osmolar, iodinated contrast agents and a control group of 1025 STEMI patients who received fibrinolysis or no reperfusion and were not exposed to contrast media during the first 72 hours of their hospital stay.

The researchers defined AKI as an increase in serum creatinine concentration of 0.5 mg/dL or higher compared with admission values or a greater than 25% relative rise during the first 72 hours after the PCI.

Results demonstrated no statistically significant difference in AKI rates between the PCI and control groups (10.3% vs. 12.1%), Oren Caspi, MD, PhD, of the Rambam Medical Center in Haifa, Israel, and colleagues reported online in the Journal of the American Heart Association.

AKI developed in 209 (10.3%) of the 2025 PCI patients. The median contrast dose was 160 mL in the AKI patients and 150 mL in the patients without AKI, a difference that was not statistically significant.

“It is unlikely that contrast media exposure is a primary pathogenic factor responsible for renal dysfunction following primary PCI,” the authors wrote.