IV Sodium Bicarbonate Does Not Reduce AKI Risk After Angiography 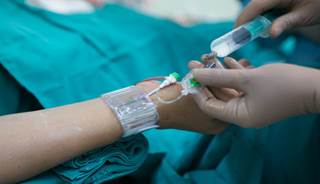 Contrast-associated acute kidney injury occurred in 9.5% and 8.3% of patients receiving IV sodium bicarbonate, respectively, rates which did not differ significantly.

Intravenous (IV) sodium bicarbonate is no better than IV sodium chloride for preventing adverse renal outcomes and death among patients with stage 3 to 4 chronic kidney disease undergoing angiography. Oral acetylcysteine also fails to protect high-risk patients from renal complications, according to a new study published online in the New England Journal of Medicine.

In the double-blind, placebo- and drug-controlled PRESERVE trial, Steven Weisbord, MD, of the Veterans Affairs Pittsburgh Health System, and colleagues assessed the risks for serious renal outcomes and mortality after angiography in 5177 patients with estimated glomerular filtration rate (eGFR) of 15 to 44.9 mL/min/1.73m2 or eGFR 45 to 59.9 mL/min/1.73m2 with diabetes (based on the 4-variable Modification of Diet in Renal Disease Study equation). Patients, who resided in 4 countries, were randomly assigned to 1.26% sodium bicarbonate or 0.9% sodium chloride and 5 days of oral acetylcysteine or placebo.

Interim results clearly showed no relationship between IV sodium bicarbonate or oral acetylcysteine and the primary composite end point of death, the need for dialysis, or a 50% increase in serum creatinine at 90 days. In addition, the IV fluids and acetylcysteine capsules did not prevent contrast-associated acute kidney (AKI), defined as a rise of serum creatinine of at least 25% or 0.5 mg/dL. Contrast-associated AKI occurred in 9.5% and 8.3% of the IV sodium bicarbonate and IV sodium chloride groups, respectively, and 9.1% vs 8.7% of the acetylcysteine and placebo groups, respectively. These between-groups differences were not statistically significant. Previous trials, which involved fewer patients, showed mixed results.

“Consequently, our finding that the use of sodium bicarbonate and acetylcysteine did not reduce the incidence of our primary or secondary end points supports the strong likelihood that these interventions are not clinically effective in preventing acute kidney injury or longer-term adverse outcomes after angiography,” Dr Weisbord and the team stated.

Patients did not necessarily receive the same fluid volumes, which is a limitation.

Recommended for you
Related Topics